Running of the Green Race Report!

My parents arrived Friday evening for a quick visit.  It was one of those quality-time-with-the-grandson-and-spades-and-wine-for-the-big-people visits, this time with the addition of a 5k for everyone!  James was so excited to see Meme and PopPop.  After he finally went to bed, unwilling to be serenaded by his grandfather ("move" - "where?" - "out") we settled into the 2011 season of our spades battle.  Mom and I started out ahead, but by 11:30 we were somehow slightly behind.  Oh well, the game continues until New Year's Eve!

But that late night did not help the race.  We had a leisurely morning and got to the race, at the Greensboro Children's Museum, about 15 minutes before the start.  This was a small race- two port-a-potties small.  Dad, Mom, Jenn, and James started near the back, and I found a place near the front, surrounded by Girls on the Run participants excitedly clutching their water bottles.

The race began with all of the kids running very fast and the adults dodging them as they gleefully sprinted to their inevitable slower pace.  The race was small enough that I could see the front "pack".  It was a great feeling.  At about the half-mile point, my buddy John passed me.  This is not surprising because he s very speedy; what was humiliating was the fact that he was pushing not one but THREE children in his double jogger as he yelled, "hey, Margie!" and breezed on by.  I would hate him but it is impossible.  He's just too dang nice.

I would say that the spades and wine kicked in when I realized that my first mile, at 7:13, was going to be my fastest by a lot.  To run under 22 minutes, I needed to average a seven-minute pace.  Normally I like to get progressively faster during a run, but the way I was sucking air made me think that maybe that wasn't going to happen.  Oh well.  The course was lovely and wove through old neighborhoods as well as downtown.  I passed a few people, but just as many passed me.  I am proud of the fact that I didn't quit or get angry at myself at not making the goal.  I spent about a minute on the what ifs and then just enjoyed a fun race through my city.

I finished in 22:39 and ended up winning my age group!  My buddy and co-worker Paul also won his age group, so now we both have new shirts, although mine is way cooler. 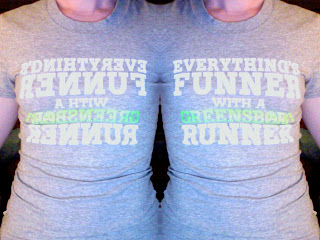 (the camera on the computer put the words backwards,
but there was a mirror effect.  So, here I am with my conjoined twin.)
My dad's goal was to run the race, his first in a while and his first since foot surgery, in about 36 minutes.  Well, he finished in under 32:00!  Amazing.  I am so proud.  He didn't even look like he was going to die, and I didn't hear him curse at the end.  Jenn, my Mom, and James walked the course, and James hopped out at the end to run the finish line.  It was so incredibly cute, and he really got it.  He's seen me race enough times to know that crossing that line was a big deal.  So cool!

After the race, there was a puppet parade and free entrance into the Children's Museum.  We visited the amazing Edible Schoolyard and James spent a lot of time playing with cars, trucks, dump trucks, trains, airplanes, and pretty much anything with wheels.  It was great.

So, I end with some pictures. 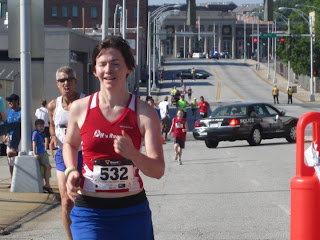 I thought I looked at the camera.  I really did. 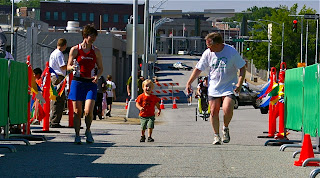 James running into the finish chute. 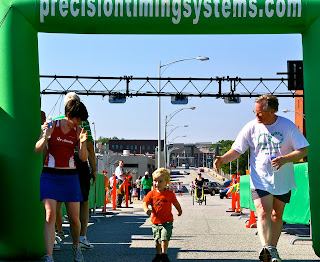 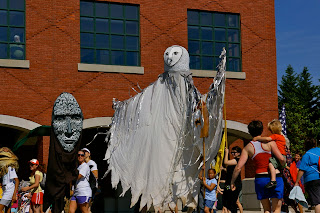 How cool is that puppet? 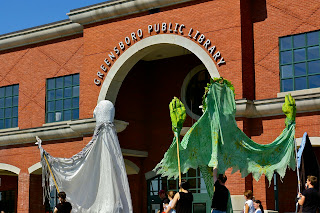 more puppets in the parade 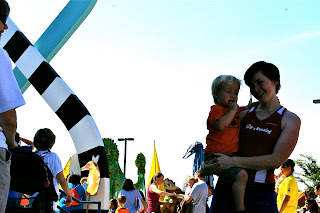 One Step Forward, Two Steps Back

Ah, the cautious optimism of that last post.  I had just had a great running week but knew that one week could not be a trend on its own.  The following week I only ran twice, and neither one was during the week!  I could blame it on outside forces (Monday- rain, Tuesday- school, Wednesday, church, etc.), but there was time.  I know it was there.  I am not good at finding it when my pre-planned schedule goes to pot.

Last week was better than zero but still sub-par.  I ran Monday, Thursday, and Saturday.  Monday was speed work, with four speedy quarter-mile repeats.   Thursday I ran with the bambino, and Saturday I did five miles in forty minutes, which is very fast for the distance for yours truly.  Clearly, when I get into my running shoes and out the door, I run hard and am proud of the effort.  But how do I get out of the door?

Take this week, for instance.  Yesterday (Monday), I packed my running clothes in a very chic Target bag (as in, the whitish plastic one from the checkout- absolutely nothing fancy or lovely, just reusing) and took them to school.  I had a school event at 6:00, but I figured it would be okay to run in between and show up slightly sweaty.  It would not be the first time.  Instead, I looked out the window at 3:50 as the students were leaving and said, "you know, it looks a little like rain.  Better just stay in and grade."  This wouldn't be so terribly bad, but instead of grading I played hearts on the computer.  Sad.

Today I am home with little man, who has a bit of a fever.  He napped for three hours this morning, and I napped for two.  I never nap.  Hopefully it will give me energy to go to the track tonight.  There's rain in the forecast, but I also registered for a 5k this weekend.  I may be lazy, but I am also cheap.  If I paid money for a running event, I will at least try to put in a good effort.
Posted by Margie at 2:58 PM No comments: