This has been a perfect workout week, and it's been a long time since I've had one of those.  Every morning I've woken up around 6:00, fed the still-sleeping baby, and either gone for a run or done some strength training.  Wednesday, Eden and I went to our last Mom and Baby Yoga class before I head back to work next week.

Monday, Wednesday, and Friday I ran: 2 miles on Monday; Wednesday and Friday 3 miles each.  Despite the humidity, it feels great to run outside.  Tuesday and Thursday I did my circuit routine.  It's almost the same as the one that wrecked my back last week, but instead of one-legged deadlifts, I did plié squats.  I can already see and feel differences in my abs and arms.

Another thing that made this week so nice is that Eden turned three months old on Wednesday!  She weighs in at a petite 11 pounds, 9 ounces and is cute as a button.  I can't believe how fast we've moved from this... 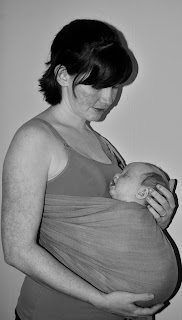 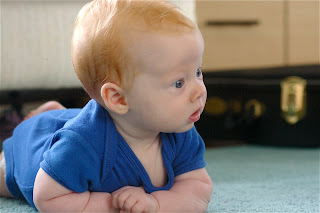 Truth be told, she still loves to be worn and I still do it.  But it's not a requirement now; she can entertain herself, and big brother loves to assist.  She is alert, loves to flirt, and only occasionally screams like a relentless banshee.  Best of all, she pretty much sleeps through the night.  Sure, we have hiccups (last night she woke up at 1:00 for a snack), but most nights she is down from 9:00 to 8:00.  I feed her at 6:00 a.m. for my comfort, not for her hunger.

With this perfect week as a confidence booster, I will (attempt to) run five miles tomorrow.  That's the longest I've run since the Cannonball Half Marathon last October.  It's also a good six weeks before I run the Miles for Matthew 10k, which you can donate to here.  (The race is for Matthew, an amazing boy with Duchenne MD.  I taught with his mom for several years.)  It's my first 10k ever and, while I will not be running especially fast, I would really like to finish in under an hour.

Oh, My Aching Back!

Last week was the beginning of The Plan: wake up around 6 every weekday morning to work out.  Alternate running with strength training.  Great idea!

I started Wednesday with a nice run with Jack the dog.  We did 2.5 miles and had a great time; I noticed all of the little changes to the neighborhood after being away for three weeks, he peed on anything that stood at least mostly still.

Then Thursday I woke up and did my first circuit workout in, oh, ten months.  (See where I'm going with this?)  I did...


I did just two rounds of this before The Bambino woke up.  We had breakfast, went to Round 3 of Vacation Bible School for the summer, and then I started to notice a problem: my back was sore.

I am not a wimp.  I do not take drugs for mere trifles.  So I stretched it out.  Stretching cures everything muscle-related, right?

By evening I could only walk bent forward, a cross between Igor from Young Frankenstein and an elderly crab.  I couldn't really carry Alfie either, and she doesn't weigh much. Friday morning when I awoke and tried unsuccessfully to get out of bed, I knew I was in trouble. My right hip was exactly three inches higher than my left.  I don't think that's supposed to happen.  I was hobbling all day, and it wasn't pretty. By Saturday morning I could walk mostly normally unless I sat for too long, so I tried a run- no go.  It felt like little knives stabbing me in the lower back.

This morning I tried again, since I could walk really normally and roll out of bed without wincing.  It was really painful at first, but I added in a lot of walking and it eventually got better.  Followed up with stretching, I now feel almost whole.

This long weekend of discomfort has taught me a few things.
Posted by Margie at 9:35 AM No comments:

Running and Beaching (and Eating)

I've meant to run more, but the best time to run is early in the morning and the best time to play spades is late at night.  These two truths are in constant opposition, especially since I like to get 7-8 hours of sleep.

My knee has been feeling funny since Memphis.  It hasn't gotten any worse, and the clicking is better.  Every once in a while, though, I step down and there is a sharp pain which I do not like.  When I google it (which is dangerous), I find that it could be arthritis, or my ACL, or a shredded meniscus, or countless other things.  I think it's a result of sitting and driving too much, coupled with a new pair of Birkenstocks that I wore too much without breaking in.  I will go to the running store when I get home for a more expert opinion, but in the meantime I run because it doesn't hurt when I run.  Risky? Oh, probably.  But so is eating as much food as I've been eating without some meaningful form of exercise.

This is mostly a picture post, so here are pictures: 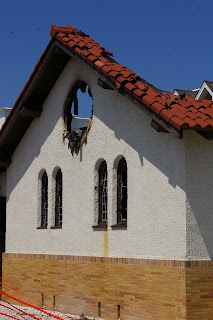 The church the day after the fire. 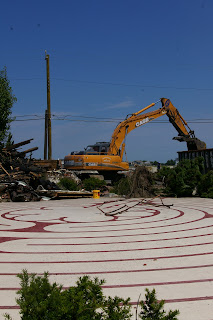 What's left of the church today, as seen from the labyrinth. 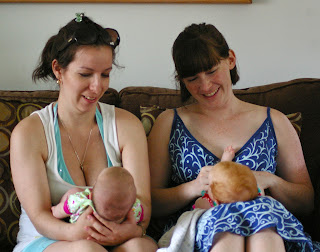 My oldest friend came for a visit with her husband and two daughters.  Our youngest had the same due date but are actually two weeks apart. 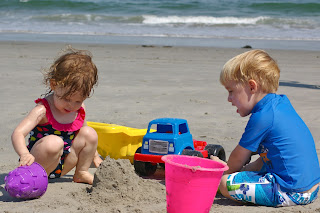 The older kids, hers and mine, playing on the beach.  So cute, non? 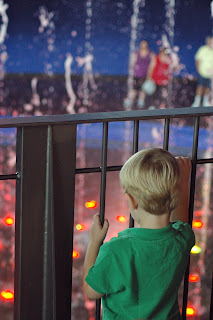 The Bambino at a water show on the Boardwalk.  He was mesmerized! 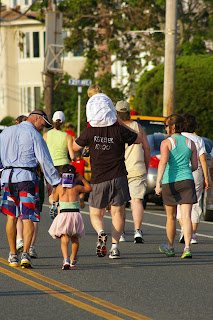 The Bambino in his first race.  He did not run the whole way, but he really worked hard! 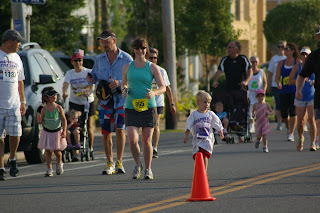 Here he is running his heart out.  He got lots of cheers! 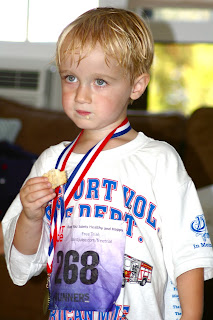 As I post this, he is saying, "I want to run a race again.  A rock and roll race.  Mama, next time if there is a rock and roll race happening, can I run it?  Cause I want to win a race!"  He's caught the bug and I couldn't be more proud.

Posted by Margie at 4:29 PM No comments:

We have arrived! In Longport, that is. After a great week in Memphis culminating in Jenn's sister's wedding, we drove 17 hours in two days and now have nothing at all to do for about two weeks.

First off, I survived the hot run at Shelby Farms. My first three-miler in months was hot, sticky, and ended faster than it began (an 8:55 final mile, thank you very much!). I am so glad to be getting back to normal-length runs and to paces that feel natural.

The wedding was amazing. Gorgeous. The Bambino did a fantastic job as ringbearer. Alfie made it down the aisle and then began to cry a lot, but she's a baby and that's what they do. We had a great time at the reception and left the following morning on our journey to the beach.

What have we done so far? Well, I went for a run with my dad this morning. We only did two miles, and that was enought to work out the kinks in my back, hips, and legs caused by sitting for two days while driving. The ocean breeze mitigated the heat, thank goodness.

We have also been watching the construction crew complete the demolition of the church next door, our Sunday home here at the beach for the last dozen years or so. It burned early Saturday morning in a freak storm. We are so thankful it didn't take down the house and that no one was hurt.

My plans for the week are as follows:
- Run at least ten miles, today included, by Saturday.
- Help The Bambino run his first race, the American Mile here in Longport.
- Kick booty with my mom in Spades. And we will, oh yes we will.
- Enjoy family time! This one should really be first because it is my primary goal.

Posted by Margie at 8:17 AM No comments: