So, I stopped running at 34 weeks because running caused contractions for me.  At 34 weeks, who wants contractions?  It still felt good to run during the run, but afterwards made me nervous.  I backed down to walking, and I tried to enjoy it.

Fast forward to this week, and guess who's full term?  Baby Alfie is!  The Bambino, my 3.5 year old, was born at 37 weeks, a little early but totally healthy.  This prompted me to get myself out the door for a run because, at this point, so what if I have contractions? 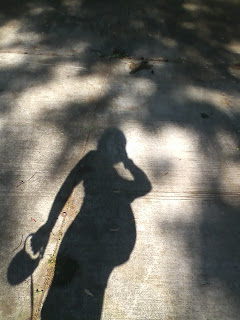 Thursday afternoon I took the non-gimpy dog for a trail run and we had a blast.  He successfully passed not one but two dogs without barking.  He also managed to not chase the feral turkey who lives in our neighborhood, although I could tell he really wanted to.  The weather has been unexpectedly cool for North Carolina in April, so both of us enjoyed getting out in the fresh air.


I did get an unexpected and rather messy nose bleed near the end of the run, but I think that just makes me seem tougher than I already am.  Some people think running while pregnant is fairly hard core, so running home very pregnant with blood smeared on my sleeve must have seemed extra tough.  Honestly, I doubt anyone noticed. 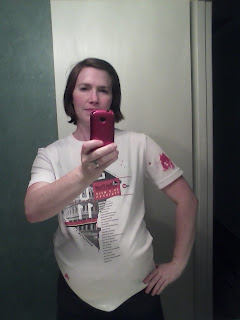 Note the blood on both the sleeve and bottom edge of my shirt.
There's also some on my leg, but you get the idea.
This morning I went for my longest run in months.  A whopping 3.6 miles, I ran for 43 minutes in and around the hood.  Aside from a little ankle soreness, it was amazing.  I brought music instead of a dog this time and just felt free.  I didn't even have to stop for a potty break, which is a pretty big deal.  We spent the rest of the morning doing fun family things like the Farmer's Market, toy store (aka thrift store), and Science Center.

After this week's two runs, I know that my body and the baby it's growing both still have a lot of run in them.  I will run as often as I want until Alfie's arrival!
Posted by Margie at 1:20 PM 1 comment: