My dad wants to run the National Marathon in March of 2013. I just found out that it is now the Rock n' Roll USA Marathon- perhaps that will make it bigger and better?  This year's race was fun, but after the half-marathoners finished, it felt tiny.

Anyway, I have said I will run this race, too.  My deep desire to make training calculators is now kicking in, times two: one for me, one for dad.  The trick?  Well, the race is 18 months away.  And, oh yeah, I'm pregnant, so I can't train anyway.

I still run- I ran 3 miles and change today, and I'll run tomorrow as well.  It's slow but rewarding.  Fast forward to April or May, and I'll have a newborn and will not run for at least 2 months.  (Last time I started running at two weeks, and that seemed a little early.  I even ran a 5k when the bambino was 6 weeks old.)  So that puts me around July 1, 2012, as tentatively building back a base.  If a marathon training plan usually lasts about 4 months, and the race is (on or around) March 15, I would need to start my plan by November 15.  So that gives me 4.5 months to build a base of 25 miles per week, building up to bi-weekly long runs of 10-12 miles.

If I begin training on or around November 15, I could do a December half marathon as a checkpoint race, like the Mistletoe Half in Winston-Salem.  The problem is that it is December 3- a little early, right?    There's the Ocean Isle Beach Half Marathon at the beginning of January, but I'm probably too cheap to go all the way to the beach when it's too cold to play in the water.  Or I could do the Cannonball Half Marathon again, which is in October, so technically before I start training...  You see how I ramble when I start thinking about running races.

Long story short, I have a long time to plan my next race.  I hope to convince my dad to do the National Half Marathon (or whatever it's called now) this March so that I can spectate and offer unsolicited training plans via mail, text, and facebook.
Posted by Margie at 2:14 PM No comments:

I have not run one time since last Saturday's race, and I do not feel guilty. My pregnant body gets as much recovery time as it needs, and it was a busy week finishing up the quarter at school. And then on Friday...

We got an offer on our house. It has been on the market since spring, and we were just about ready to pull it off and stay put. But Friday brought an offer which we quickly accepted, so we spent the weekend looking for a new house. We have it narrowed down to a few choices, all of which are close to school, church, and parks for running. They are in neighborhoods as well, which is totally new for us. The toddler and the new baby will live somewhere where people walk dogs several times a day, children trick-or-treat, and you have nearby neighbors who might just become friends. They will grow up close enough to their own friends to invite them over after school. That is just so exciting!

Running geek that I am, I have already mapped several courses from each potential house. I will no longer whine for a treadmill, because I will be able to simply run from my front door with a stroller or a dog (or two) or any combination.

So, no running last week or this weekend, but that's all right. I hope to run a few times this week to get back into it, but by early December, if everything goes well, I will be running as much as I possibly can!
Posted by Margie at 8:41 PM No comments:

We started the morning with a pre-race photo shoot.  First we compared bellies, and then we posed for something rather more normal. 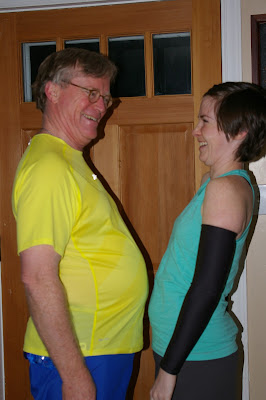 I want you to know that Dad is sticking out his belly- way out- for effect.
But it's still a pretty funny picture. 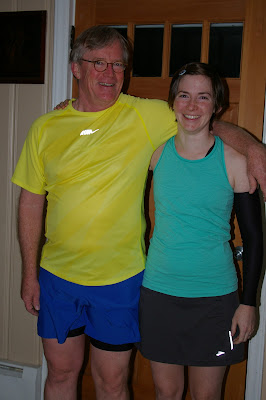 The race was smaller than I expected, but the volunteers were so nice, and there was plenty of water and sports drink.  There were also plenty of port-potties.   Thank goodness!  The family met us at mile 7 and again just after mile 8 to cheer us on and take some photos.  Then they went to a Fall Festival while Dad and I tackled the notoriously hilly course.  Seriously hilly.  We gained and lost 600 feet each over the course of 13 miles.  If that's not a lot, then I do not want to live where you run.  It felt brutal. 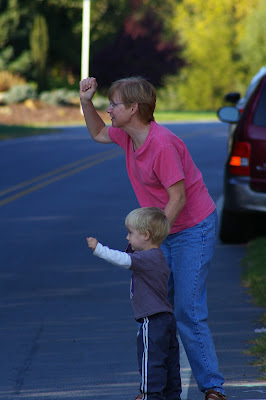 Our wonderful cheering section.  They are saying, "Go runners!"
Dad and I also received high fives from the bambino. 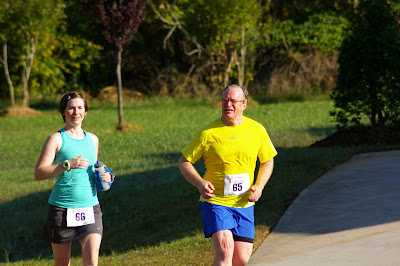 This is how hilly the course is.  Do you see just above my father's right knee?
He said near the end that his quads were aching.  We got home and
uploaded the pictures, and there's his crazy leg.  Is that normal? 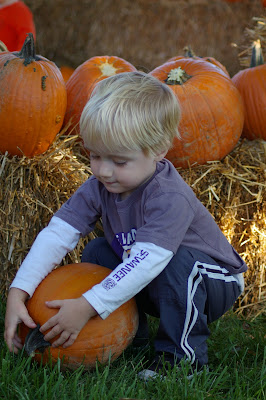 The bambino enjoying the Fall Festival.
There was also face painting and a very popular hayride.

After finishing, we met up with the family at the Fall Festival.  We ate lunch and headed home, and then the parents headed back to their neck of the woods.  What a great Saturday to spend with family!

I am officially done with anything strenuous.  I will keep running, but my longest run will be five or six miles, and as of this week it's time to add back in some yoga.  I might do a few 5ks this fall or winter, but they will be slow and for fun only.  I promise.
Posted by Margie at 5:41 PM 1 comment:

As a college rugby player, that title is a variation on a favorite post-game (i.e. Drinkining) song. Tomorrow morning, my dad and I will race the Cannonball Half Marathon. My outfit is all set, my garmin will be charged, and I am so ready to spend two hours and change with my Dad. He's just that awesome.
But tonight we will go eat pasta, followed by a few rounds of spades. My mom (who is also awesome) and I are a team for this monstrous card game. We are also ahead.
So, to recap- pasta, spades, sleep, race. Sweet!
Posted by Margie at 5:33 PM No comments: 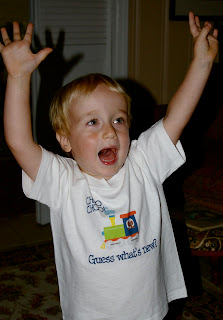 These days my pace has slowed considerably; I've gone from a really good first half of the year, race-wise- 22:05 5k, 3:44 marathon, both PRs- to running 10-12 minute miles.  And I couldn't be happier, because I'm running for two.

This time, not only am I running, but I'm going to do a half-marathon with my dad next Saturday.  Crazy? not really... A challenge? perhaps.  Dad and I are at about the same pace right now, so that is good.  I religiously wear my heart rate monitor, although I do not keep my heart rate under 140 beats per minute; that old guideline was thrown out in 2002, but nothing has replaced it.  Very frustrating for a gal who likes to know what the experts say.  My midwife says that overheating is the real risk for exercise, and I am careful to not overheat.  I let my heart get up to about 155; if it goes over that, I walk to bring it down.  I guzzle water on short runs, Gatorade and Gu Chomps on long ones. 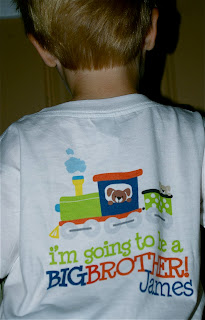 The Cannonball Half Marathon is pretty darn hilly, but I train on these hills all the time.  I've done this run twice before, but I look forward to running it differently- with someone to talk to!  My dad is just about my favorite running buddy (sorry, Brian...).  His goals for this race are to finish below 2:30 and to not curse.  We'll see how that goes.

So, that's the big news around here.  I ran 8.5 last Sunday, and I will run 10 tomorrow.  The cold snap that came in last night will make my last long run just about perfect.
Posted by Margie at 7:31 AM 2 comments: