It had to end sometime...

Monday marked 34 weeks.  We had an appointment today with the midwife, and things are going well.  Baby Alfie was very uncooperative with the ultrasound tech- we did not get a single good picture of her face.  She weighs around 5 pounds now, and we could even see her practicing her breathing.

Like the title of this post suggests, as of this week I am done with running.  It still feels good while I'm going, but the contractions afterwards are just not worth it.  I will walk and do yoga up until her arrival, but that's it.  I hope to maintain base fitness.  With the bambino, I quit running at 30 weeks and was able to come back to it quickly, so I hope that happens this time, too.

Last weekend, my dad ran his first solo half-marathon; prior to Rock n' Roll DC, we had run several together, but this was his first chance running alone for 13.1 miles.  Even for a hot day, a crowded course (28,000 runners!!!), and some hills, he did awesome.  We hopped on the Metro to see him around mile 10, making friends with another group of fans on the train who told us what stop to use, etc.  I had forgotten the map at home, and it's pretty darn difficult to pull up a map on an iphone when you're underground.  Thankfully, this group had large posters, so it was a safe bet to ask them for help.  They even helped get my dad's attention when we finally saw him.  We all yelled "Pop-Pop!" (the bambino's name for his grandfather) until he saw us. 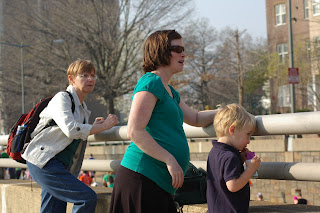 In the huge crowd, it was a bit like playing Where's Waldo to find your runner.  He was wearing a white hat, yellow shirt, and shorts, so as people came out from the underpass we'd look from the top down. 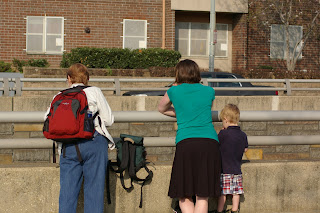 Looking for our runner near Gallaudet University
And then finally we saw him coming and Jenn got a lot of photographs. This whole time, the bambino did great- he had his snack and happily watched all of the runners.  Since it was Saint Patrick's Day, there were some spectacular outfits.  I love fun running clothes, but the women running in plastic wigs on a warm spring day made me feel vicariously overheated.  Yikes! 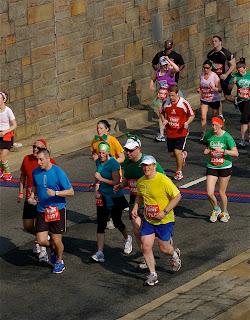 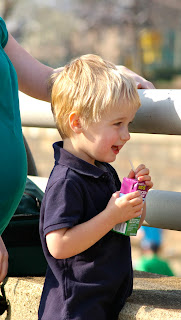 After the Dad-sighting at mile 10, we hustled to the finish, arriving almost 30 minutes late.  The Metro was packed, and there was construction, so there was no hope.  We reconnected with our runner and quickly decided it was a far, far better idea to walk a few miles in the beautiful spring weather to food than to squish ourselves like sardines into the Metro.

After lunch we went to see the cherry blossoms at the Tidal Basin.  The unseasonably warm weather had brought out the blooms a little early. 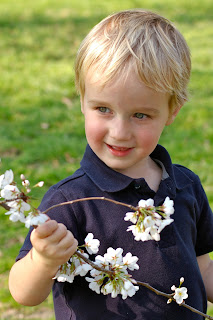 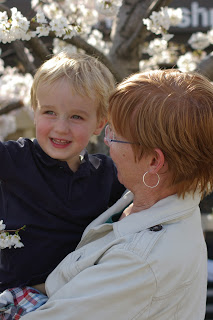 with Mémé
Dad and I hung out under a tree while the rest of the family traipsed around looking at flowers and trees.  Dad had just run a race and had some good Salvadoran food; I am very pregnant and had likewise just eaten a lovely meal, so we were very happy to rest in the shade.
Posted by Margie at 11:20 AM No comments:

I Dream of Training

First, a disclaimer: I love being pregnant.  I love how my body has changed, and I love the purpose.  I already adore the tiny little girl growing in my (also growing) belly.  I cherish every head-butt, hiccup, and other movement that reminds me she's there.
I love being pregnant, but I fantasize about training and really running again: running more than three miles, getting progressively faster instead of slower, having different kinds of runs within a week.  Right now, the variety is indoor v. outdoor, music v. stroller.  I look forward to long runs, long race-pace runs, hill repeats (remind me that I'm looking forward to them, because when they happen, I will whine), speed work, tempo runs, stroller runs, and plain old runs.  It will be so nice to look at a month of training and see variety and progress toward a goal.
Perhaps this is the difference between runners and joggers: runners like goals and progress, whereas joggers just want a fitness routine.  Being pregnant has made my focus shift from goals to fitness, from progress to maintenance, and I'm itching to get back to normal.
Posted by Margie at 12:05 PM 2 comments: